Opening line: ‘First the colours. Then the humans. That’s usually how I see things. Or at least, how I try.’ 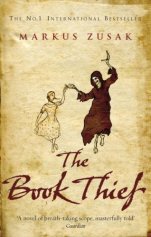 In 1939, Liesel Meminger is taken to live with a foster family in Molching, a suburb of Munich. She never knew her father; her brother died on the way; her mother is too poor to care for her. Her new family isn’t much better off. She goes to school and plays football on the street with the neighbourhood boys. Far away, it seems, the world is at war. But over the next few months and years the war begins to be felt in Molching, in the basement of 33 Himmel Street, where amidst the discovery of reading and words and the music of the accordion the Hubermanns and Liesel are hiding a terrible secret.

To be honest, I wasn’t expecting to like The Book Thief by Markus Zusak. And in all honestly, although the first few pages really gripped me, I was getting rather bored until page 170 or so. But then Things started happening and it kept my attention until the very end and for a while afterward. (Sometimes I can start another book the next day after finishing one; but with others I have to wait a day or so before I’m ready to move on.) At times I found the narration somewhat tiresome — the novel is narrated by Death, who sometimes tells you events out of order — but by the end I appreciated the way and the order in which I as the reader was exposed to the information. The ending was powerful; I wish I knew more of what happened next.

One thing I found particularly interesting was that this wasn’t your typical WWII novel. This wasn’t set in a camp, it wasn’t about resistance fighters, it wasn’t about people in occupied territories. While I was reading this novel, I realised that I had never really took the time to think about what the war was like in Germany. Being an American, living in Britain, the primary narrative I’ve been exposed to has been the Anglo-American one. What I appreciated about The Book Thief was that it depicted a microcosm of, well, ‘normal’, realistic people. Families trying to get by. Regular people not all that concerned with politics, varying in ignorance or knowledge, varying also in their opinions. I was struck by the scenes in the bomb shelter: swap the names of the targets and the attackers and it would have found its reflection in the suburbs of London. In some ways I found this uncomfortable. In the same ways, I appreciated being challenged.

What did I like most? Liesel, and how she used words and reading and writing to understand what was going on in the world around her.’There was once a strange, small man. But there was a word shaker, too.’

If you can make it through the first 170 pages and bear the company of Death, you just might like this book.