You thought I was going to post about London next, didn’t you? Well I’m not, because Chris sent me photos of our second day in Cyprus and now I’m going to share them with you.

As I said, we had planned on going to Nicosia on our second day, but the feast of Epiphany meant it was a public holiday and the buses weren’t running as scheduled. We knew there would be a procession from St Lazarus Church to the marina. So we squeezed our way through the crowd that had welled up around the marina and waited an hour for the procession to meet us there.

A military band played while the various priests, acolytes, and other members of the procession passed us (to me it looked like an assortment of girl scouts and boy scouts, but who knows what they were?). Meanwhile, the Hellenic Sea Scouts rowed their boats into position in the marina and the men would be taking part in the ceremony waited on a boat. 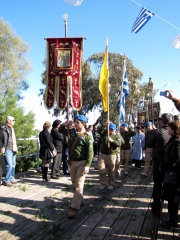 The ceremony was this: the Cypriot Orthodox priests chanted — alas, I don’t know what they said, but it sounded eerily beautiful — and then a priest tossed a cross into the water. The men on the boat all dived after it, and after a few minutes of frenzied splashing, one of them emerged the victor by catching the cross. I actually couldn’t see any of this, which is why I’m glad Chris was able to get some pictures.

The photo on the right shows a bit how many people had gathered to watch: people had even climbed on the rocks separating the marina from the rest of the harbour. That patch of white foam between the boats is where the battle for the cross was taking place.

After the ceremony, Chris and I found a café and read our respective books. Then we wandered around, found a place for lunch, and read our books. This became the theme for our day because — you guessed it — all of the museums and shops were closed for the public holiday.

While we waited for our lunch, I read The Thief and Chris read Ransom whilst sipping Cypriot lemonade. I had read Ransom on the plane to Cyprus — both books are somehow Greek-related. Don’t worry, I’ll write a review of Ransom later.

The church of St Lazarus was also closed, so you will have to be content with pictures of the outside of the church. However, there was a shop next to the church that was open where I bought a lovely icon of the Madonna and Child. 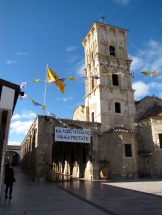 So that was our day in Larnaca, the city where we stayed. A return to Cyprus in the future is a must, if only to visit all of the places that I couldn’t because they were closed when I was there.

2 thoughts on “Wandering in Larnaca”