This week has been graduations at my university. I ushered three of the eight ceremonies this week. Our university, being the oldest in Scotland, has a wonderful ceremony full of tradition. (Though I will admit, the quality of Latin spoken these days makes my medievalist heart cringe.) One of the honorary graduands at this year’s ceremonies was none other than Sir David Attenborough. I had the pleasure of attending his lecture on ‘Alfred Russel Wallace and the Birds of Paradise’ on Tuesday night and of attending the ceremony in which he was honoured. 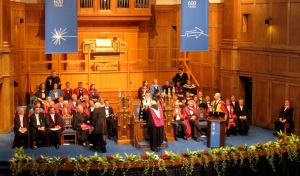 In my last post I mentioned that it had been pouring rain. Well, it certainly was on Tuesday, the first day of graduations.

At the end of each ceremony, the academic procession leaves the hall to go to Sallies Quad. A piper leads the way, followed by the university’s maces, each carried by its own bedellus. Behind them come the Chancellor and Vice Chancellor and the rest of the Senatus Academicus, the honorary graduates, and the new graduates. The procession always goes right past my office, so I stand out on the front stoop to watch them walk past, waving at any of the graduates I might know. Well, the very first day of processions still took place in the rain.

The rain also meant that I didn’t do any gardening this week, and the garden is already being taken over by weeds. I did a bit of weeding today, since it was sunny and mostly dry, but I only cleared the area around the sweet corn. Weeds in a garden of this size are going to be a constant battle.

I also had a moment of happy surprise this week. My walk to and from work takes me along and across the Kinnessburn, a smallish river. There are usually an abundance of ducks around the footbridge that crosses the burn. One particular duck is my favourite — she appeared last year and has the most extraordinary colouring, being cream and white instead of the usual brown and black. I had been worried that something had happened to her since I hadn’t seen her since before the mating season began, and though I hoped she just might be farther upstream, I hadn’t gone on a walk along the burn to be sure. All is well though, for she has come back! With babies! Eight of them, already looking adolescent-like and less baby-like. I saw her again today and am very pleased indeed. 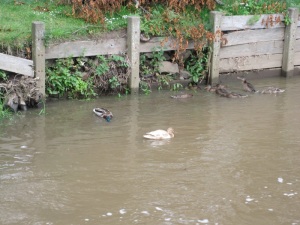