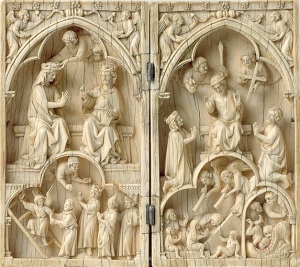 Diptych with the Last Judgment and Coronation of the Virgin, ca. 1250–1270

I just moved my short story “Masterpiece” from the In Progress to the Finished folder. What a feeling of finality! But a good feeling, too. “Masterpiece” went through many transformations. As I was cleaning up my folders I found a few: the first manifestations not yet being a dystopia, and then the version that I read at the 2008 Sigma Tau Delta conference. I had thought Parts I and II had the exact same word count, but then I saw that they didn’t, and I’m not going to bother figuring out which is the longer or shorter. “Beauty is truth, not perfection.” Although the two parts can stand independently, they are best read together. The mental image I had in mind was that of a diptych. Each piece can be taken separately, but together they form a complete whole.

Of course, I must thank everyone who unwittingly allowed me the use of their names. I think there was only one name in “Masterpiece” that wasn’t from someone I knew.

I was going to go the Summer Fête today at church—mainly because they were going to have a jumble sale, and after reading To Say Nothing of the Dog I had to go see one—but right as I was getting ready to leave, there was a downpour. There was even thunder. No lightning though, that I could see. So I stayed inside and worked on “Masterpiece” until it was perfect. Or nearly so.