Yesterday was my day off, so I read The Day of the Owl, a semi-fictional account of the mafia by Leonardo Sciascia. I found the characters’ feigned ignorance and that half the novella was complete anonymous dialogue without any tags whatsoever tedious. Very Hemingway. I like Hemingway, but this was a bit much. I probably would have appreciated the novel better if I had known more about the mafia, or at least had seen The Godfather; as it was, I was mostly working from what I gathered from The Sparrow and Children of God (I’m beginning to wonder if there’s something not mentioned in those books…). The day was not a complete sabbath because I managed to slog through the introduction to The Regiment of Princes.

Knowing that I had much to do, my goals today were to translate half of The Wife’s Lament and read the Prologue to Regiment, roughly 2000 lines (of Middle English, to be read on the computer screen). Felicity and I went to 666 this morning and stayed there until we were done.

It was a pretty day, so to take a break I went on a walk. I like to talk to people when I’m on walks, but none of my usual contacts answered their phones, so it was a good thing I took my camera along with me as well. I was defeated by a massive depository of seaweed so I didn’t make it onto West Sands proper (I must invest in a pair of wellies)—all of the people in my picture were sensible and took the long way around. I’m pretty sure that some of the coolest cloud formations I’ve seen have been at West Sands. The sign, in case you can’t read it, says, “Danger.” The black bird sitting on it amused me. I also went to Castle Sands and almost didn’t recognize the beach: the rock ridges (“bones” as I think of them) were completely covered with sand. I hadn’t been down there with the tide out since before the massive storm a few weeks ago, so maybe that’s what did it. 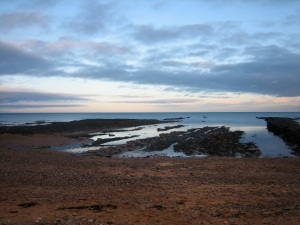 Now it’s back to work until time to Skype with Kelly, and possibly Kali…

At half three we shall
speak philosophy and life;
find joy in laughter.